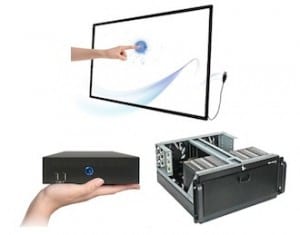 Interactive signs are more engaging than static signs and allow you to provide more content to your audience, as their grab their attention for longer periods of time. They take the first step towards building a relationship with your potential customers, and can do much more than simply provide information.

These interactive “kiosks” are increasingly used in conjunction with the traditional one-to-many digital displays. This approach serves two purposes, because the individual viewer can be engaged with interactive content or messaging, while passive messaging can be provided to the masses.

How are businesses using interactive touch-screen digital displays? General Mills, owner of the American Jolly Green Giant brand of sweet corn, used interactive digital signage for a marketing campaign in which children and adults were encouraged to take a pledge to eat more vegetables. On-screen animations were triggered depending on whether the individual chose to take the pledge or not.

Meanwhile, South Korea has been pioneering digital interactive touch-screen kiosks that incorporate facial recognition technology. 26 information kiosks in the International Finance Centre Mall, Seoul, have been fitted with motion detectors, cameras and touch-screens. The shopper’s movement is tracked as they approach the kiosk, while their face is compared against a database of 5,000 other faces. The clever part is that the software is designed to estimate a person’s gender and age, so it can present them with interactive, personalised advertisements for retail stores and restaurants.  Personal data will not be collected, as this would violate South Korea’s privacy laws.

This kind of interactive, personal content has the potential to really tap into consumer interest. Those responsible for digital signage within companies and organisations need to start thinking about how they can exploit thesetouch-screens to enhance communication and marketing.

Interactive touch-screen technology won’t be an appropriate solution for all digital messaging applications but the relevancy of interactive digital signage should not be ignored.