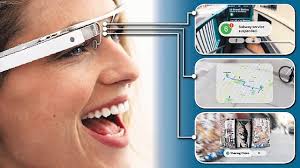 Have you heard of Google Glass yet? They’re a new type of augmented reality eyewear created by Google, which are set to transform the world of marketing and advertising. The glasses being promoted as a “wearable computer”, attached to the frame of your eyeglasses with a small screen in one corner. Wearers will be able to access information, which will appear before their eyes on a lens, rather than a screen. Pretty cool, right? So what will it mean for the digital advertising industry?

We’ve already seen researchers at Belgium’s Ghent University experimenting with digital contact lenses (see our recent blog: Digital Signage Contact Lenses A Possibility?). It’s early days for this little gadget, but the team are confident that they’ll be ready for real-life applications within a few years. Google Glass will be available to consumers much sooner, in 2014.

So far, Google has stressed that there won’t be advertising on the glasses, but will they be able to resist the potential advertising revenue indefinitely? And how long will it be before we see similar products from other companies? So far, we can only speculate, but if this new technology takes off, it’s undoubtedly only a matter of time before the marketing potential is recognised.

Businesses around the world are already getting excited about the advertising potential. These glasses are smart glasses, which means they can fully integrate with other channels such as social media and mobile marketing. If Google Glass takes off, consumers could be targeted with personalised advertising, rather than generic white noise. They could quickly become a vital part of any company’s digital-out-of-home (DOOH) strategy.

Sceptics have wondered whether the glasses might seem a little ungainly to the more image-conscious amongst us. They’ve also questioned whether people might find personalised smart glasses adverts a little intrusive. Nevertheless, the potential of Google Glass is endless and we are excited to see how it will impact the digital signage industry over the next few years.